My parents were here the week of my surgery and it was a blessing to have them here. Their support throughout this journey has meant the world to me. They have never made me feel guilty for all the times they have jumped on a plane to come and be with me. They are not rich in the multi-million dollar sense, but as for compassion and unconditional love, they are the richest people I know. It gives me a lot of comfort to not have had to be the one to ask them to come be with me. Instead they have always told me they want to come no matter the expense.

I really enjoyed their visit and appreciate them taking care of Teya and me. It is nice to not have to worry about taking care of the house and Teya the day of my surgery as well as the days after. Less stress means quicker recovery. It is wonderful to have someone really take care of you for a few days. As women we feel guilty asking for help, even for the little things, like making tea, meals & cleaning. It is silly really, but that is how we are. My mom made sure I took it easy by always asking me what I needed and if I was doing something, she would shoo me away and tell me to go sit down and relax, which is what I needed for a couple of days.

Since my surgery wasn't as invasive as it could have been, I was able to truly enjoy their visit the entire time they were here and of course, Teya had a great time. She got some grandparent spoiling and enjoyed their visit. When it was time for them to leave, it was too soon. It was hard watching them go. We are already looking forward to our trip to Michigan in August.

Here a a few pictures from their visit:

Me and the butterfly princess 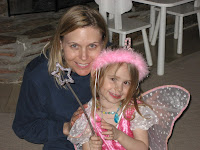 Teya and my parents in our backyard. 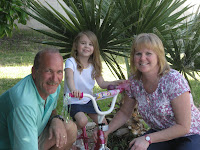 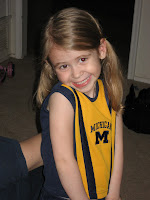 Sometimes we get what we need from unexpected places/people and this post is to give thanks for someone's kind words.

One of the teachers I work with in my class and I were talking this week about the number of hours we work and she turned to me and said - You really amaze me. You work 8 to 9 hours a day, on your feet for almost all of it, taking care of the kids and after everything you have gone through and are still going through, you never complain about being tired. I almost lost it emotionally. Other than my mom, this was the first time someone has given me such a compliment. It felt really great to have this recognition from someone who sees me every day. I try hard each day to get up and do what is needed, even through pain and fatigue. I do it for myself, but it felt great to have someone notice and give me credit for my efforts. I know it can be difficult to remember what people are going through when you see them everyday, so I wanted to say thank you - Thanks Jeri!
Posted by Tina Sullivan at 2:22 PM No comments:

Thank you for all the well wishes. The luck of the Irish was with me on Tuesday as the surgery went very well . The day of surgery I was home around 1:30pm and spent the afternoon and evening in bed. I attempted to get out of bed once and got extremely nauseous and dizzy, so I just stayed in bed. The pain was manageable, and compared to my last surgery, really easy to deal with. It is now 2 days after and I feel pretty good. I'm sore and the area is really tender, so I am trying to take it easy. With my parents in town that has been easy to do. My mom has been preparing the meals and my parents both have been keeping Teya occupied. Today they went to the zoo and right now they are all out in the hot tub. It is shaded right now, which is good since it is about 87 degrees outside. They are really enjoying this weather.

Again, thanks a lot for all your support.
Posted by Tina Sullivan at 5:13 PM 7 comments:

Tina is home and doing well...

Hey all! Todd here. Just wanted to let you know, Tina had her surgery today, and is now at home resting and doing great...

Although they were not able to find the lymph node(s) the mole drained to (so therefore the surgery was a bit easier than it could have been), her surgeon did take a centimeter and a half of margin around the area just to be sure. I will leave the details to her, but the surgeon said she did great and hopefully she is off to an easy recovery! Teya and I are proud of our girl :)
Posted by Todd Sullivan at 3:58 PM 19 comments:

A quick post to let everyone know that my MRI results came back clean and clear. I love these results! My parents flight will be landing soon, so Teya and I are heading to the airport.
Posted by Tina Sullivan at 6:31 PM 5 comments:

My CT results are in and they are great - all clean! This gives me a really good feeling about my surgery next week. I will have my MRI results this week. Friday for sure as I will be at my docs office for my routine bloodwork, but hopefully they will call me before then.

Thank you for your continued prayers and positive thoughts.
Posted by Tina Sullivan at 10:38 PM 12 comments:

I've had both my CT scan and MRI, but no results yet. I will have them this week, but I am not sure if it will be tomorrow or Friday. My surgery has been scheduled for Tuesday, March 17th. I'm anxious for it to be over with. My parents are flying into town to be with us during and after. I am so happy that they will be here.

Sorry this is so short, but it is late and I am tired.
Posted by Tina Sullivan at 10:08 PM 2 comments:

Where do Freckles and Moles come from?

My friend Cathy asked me yesterday if I knew where freckles and moles came from. What a great question! I didn't exactly know the answer, so I looked it up. I found the following article.

Freckles, Moles and Skin Cancer
Freckles and moles are both areas of pigmented skin. However, they differ in that freckles are a harmless skin condition caused by sun exposure, while moles can progress into skin cancer.

Freckles
Freckles are small, flat areas of skin pigmentation that develop after birth. Usually seen on the arms and face, freckles can be red, brown or tan. Light skinned or light haired people are generally more susceptible to developing freckles, as are redheads.

Freckles develop on a person's skin due to sun exposure. While genetics are not the direct cause of freckles, genes do determine whether we have light colored skin or hair, both of which increase a person's chances of developing freckles.

Most freckles develop in late childhood, but it is possible to develop freckles later in life.

Freckles and Skin Cancer
Although freckles do not cause skin cancer, significant freckling may indicate a heightened risk of developing skin cancer through moles or other skin conditions. In addition, some early symptoms of skin cancer resemble freckles. As a result, always have new growths or alternations in your skin's pigmentation checked out by a dermatologist.

Moles
Moles are collections of melanocytes, the cells that determine skin color. Most moles resemble small brown or spots on the skin and may be either flat or raised. Moles can also be:

Types of Moles
Unlike freckles, moles can be present from birth. Called congenital moles, these moles have a higher risk of progressing into skin cancers than moles that develop later in life. Congenital moles occur in approximately one percent of the population.

Skin Cancer and Moles
The vast majority of moles are harmless, but any mole can develop into skin cancer. Dermatologists recommend having moles with any of the following characteristics examined:

Moles that may indicate skin cancers are usually surgically removed and examined microscopically for signs of cancer. Removing moles is often the only treatment needed for early stage skin cancers.

Preventing and Removing Moles
No sure way to prevent moles exists. However, avoiding excessive sun exposure can reduce the number of moles that you may develop. As genetics play a role in mole development, prevention is not always possible.

Unsightly or irritating moles can be removed by a dermatologist. They can either be removed surgically or frozen and then shaved away. If new moles develop where moles were removed, it's best to return to the dermatologist for an evaluation.

Pale Skin Is In

Promote Your Page Too